One of Scotland’s favourite airfields has always remained extremely popular. One newspaper letter once stated: ‘If God had designed an airport, it would have been Prestwick.’

Prestwick’s illustrious life began not as thought with the advent of Scottish Aviation Limited but around 1934, as a civil airfield. The airfield, then known as Monkton, was used by aircraft such as airliners of Midland & Scottish Air Ferries Ltd to counter adverse weather conditions at Renfrew.

David McIntyre, with backing from the Duke of Hamilton, ran Scottish Aviation and the company was contracted by the military to run No 12 Elementary and Reserve Flying Training School (E&RFTS) from February 1936 using a variety of aircraft. These included a few Fokker monoplanes that became a well-known local sight for many years. Becoming an Elementary Flying Training School (EFTS) as the Second World War broke out in September 1939, using de Havilland Tiger Moths. The school continued to use Prestwick until disbanding in 1941 and it employed Dundonald as a Relief Landing Ground. Air observers and navigators were also trained at Prestwick from 1938 under various banners, including No 1 Civil Air Navigation School (CANS) and No 1 Air Observer & Navigator School (AONS) until 1941.

Other forms of training also took place in the form of No 1 (Coastal) Operational Training Unit in 1940. No 3 Radio School, later No 3 Radio Direction Finding School also used Prestwick before leaving for Hooton Park in December 1942. No 1527 Beam Approach Training Flight also carried out work at Prestwick for the majority of the war, the unit’s name changing to be known as a Radio Aids Training Flight (RATF) prior to disbandment in February 1946.

This versatile airfield was additionally home to a number of day and night fighter squadrons and detachments throughout until 1941, with aircraft such as Boulton Paul Defiants, Hawker Hurricanes and Supermarine Spitfires operating from the site. No 141 Squadron in particular found Prestwick a valuable haven after its Defiants had suffered quite a mauling while serving further south during the Battle of Britain and had to be evacuated further north.

The biggest role of all for Prestwick began in September 1941 when the airfield transferred to No 44 Group. Many familiar aircraft types such as Boeing B-17 heavy bombers and Canadian-built de Havilland Mosquitoes in course duly passed through as part of the transatlantic ferry route operated by the Atlantic Ferry Organisation (ATFERO). A month later No 1425 (Communication) Flight used Consolidated Liberators and Vickers Wellingtons for the development of a ferry route from Prestwick to the Middle East before moving to Lyneham in April 1942. The Air Transport Auxiliary also operated at Prestwick through No 4 Ferry Pilots Pool between 1940 and 1945. All this made the site a very busy airfield and over 37,000 aircraft had passed through Prestwick by the end of the war. However, peacetime saw a dramatic decrease in military activity at Prestwick and the airfield was officially handed over to civilian control on 1 April 1946.

Scottish Aviation subsequently increased their activity here, converting military aircraft for civilian use. The company also began designing and manufacturing aircraft, with the Pioneer and Twin Pioneer communications and transport types being the most famous of its indigenous products. Bulldog trainer and Jetstream airliner production was also moved to Prestwick and Scottish Aviation eventually became part of BAE Systems.

Plans for Prestwick to serve as an airport had already started during the Second World War. Scottish Airways started operating a number of services after the war and commercial operations gradually increased through the 1960s and 1970s, though even by the early 1950s worries were growing about its status as Britain’s second international airport due in part to political indifference. Having begun as a grass airfield in the 1930s, two concrete runways and improvements were added in 1941/1942. Post-war changes to the runway layout, which saw a combination of a much longer main runway and a brand new example run southwards into the by now disused second Ayr Airfield at Heathfield, allowed larger passenger jet aircraft to operate from Prestwick. Other new facilities such as new terminal buildings to replace the famous 17th Century Orangefield Hotel were also added, while major alterations to the surrounding road system needed to be put in place for a by-pass road to open in 1960.

The Americans returned when the United States Air Force (USAF) arrived in 1952, with the Military Air Transport Service (MATS) using former RAF facilities at the airfield until 1966. Prestwick had still not seen the end of military activity as the Royal Navy appeared in 1971 for HMS Gannet to operate alongside the commercial airport. Westland Sea Kings carried out anti-submarine warfare and air-sea rescue missions, primarily through No 819 Squadron, operations continuing with a number of upgrades to these helicopters. No 824 Squadron carried out flying trials with more Sea Kings for around two years from 1987, after which the aircraft were transferred to No 819. The airfield became RNAS Prestwick in 1994 and No 819 Squadron continued to operate until it was decommissioned in 2001. The Search and Rescue Flight, one of the busiest in the UK, continued until February 2016, with the forthcoming retirement of the Sea King and transfer of the Search and Rescue role to the civilian Bristow Helicopters, who continue to use Prestwick for this role.

On the commercial airport side of operations, passenger numbers had continued their steady fall since the 1960s. A major blow occurred on 6 March 1990 when Prestwick lost its ‘open skies’ monopoly with transatlantic flights moving to Glasgow International Airport. There were real closure fears but BAA Limited sold the airport to Canadian entrepreneur Matthew Hudson, who then oversaw the construction of the railway station for the airport, the first Scottish airport to have one of its own.

Irish airline Ryanair began its first route from Prestwick in 1994 and continues to operate from the airport today. Military aircraft from the UK, USA and Canada are among those who continue to regularly use the airfield as a stop off and refuelling point, all of which proved most useful during both Gulf Wars. After being sold by Hudson to Stagecoach in 1998, and then subsequently to Infratil in 2001, the Scottish Government took ownership of the airport for £1 in November 2013 as it was considered a vital strategic asset. The Government promised to begin “turning Prestwick around and making it a viable enterprise” and it underwent a rebrand in 2016. Prestwick is also one of a number of sites being proposed as the location of the UK’s first spaceport.

Famously nicknamed ‘The Window’ because of its tremendous fog-free weather record, there are still plenty of past physical reminders, such as a mixture of wartime hangar designs at the Monkton end of the airport. The building known as the Palace of Engineering transferred there to assist Scottish Aviation in 1941 from Bellahouston Park in Glasgow after forming part of the Empire Exhibition three years earlier. 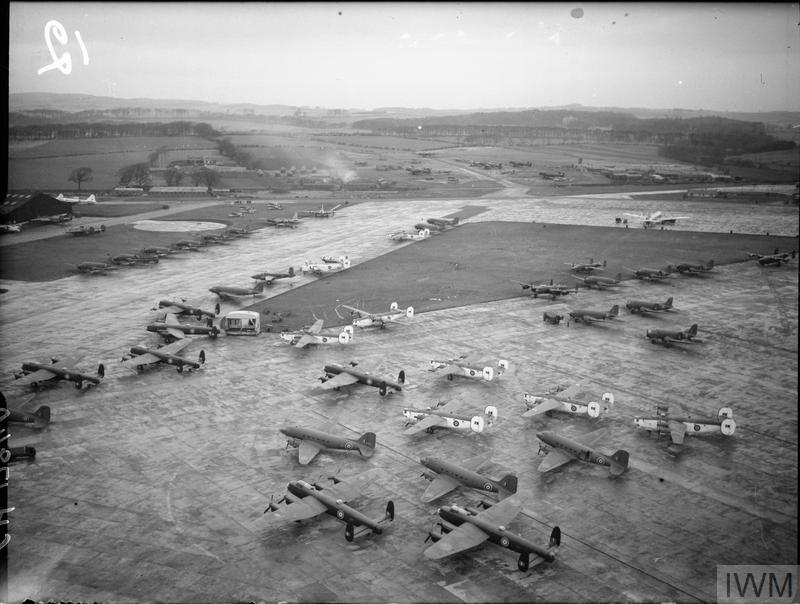 An aerial view of the Transport Command delivery park on the northeast apron at Prestwick, during the Second World War. © IWM (CH 17840) 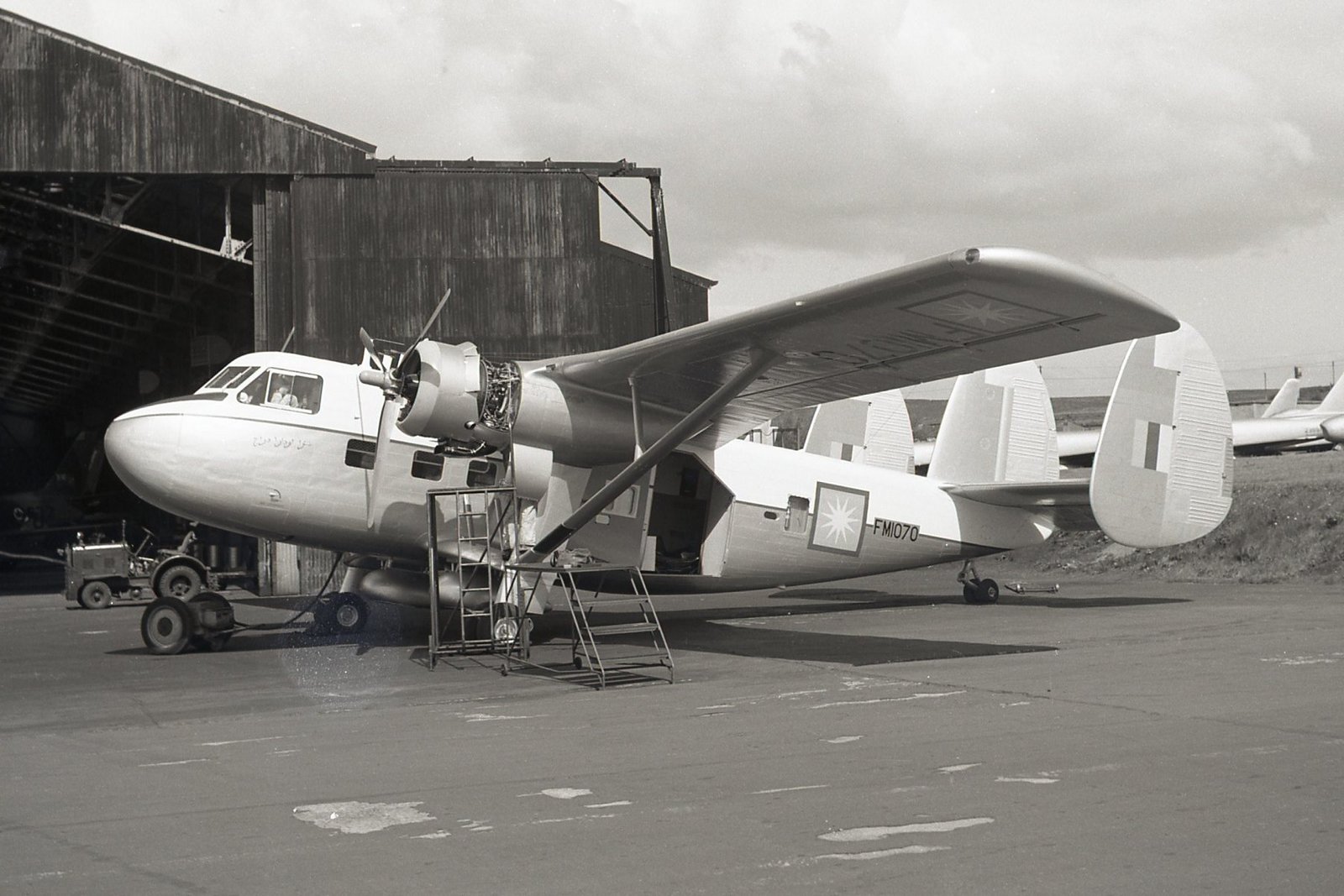 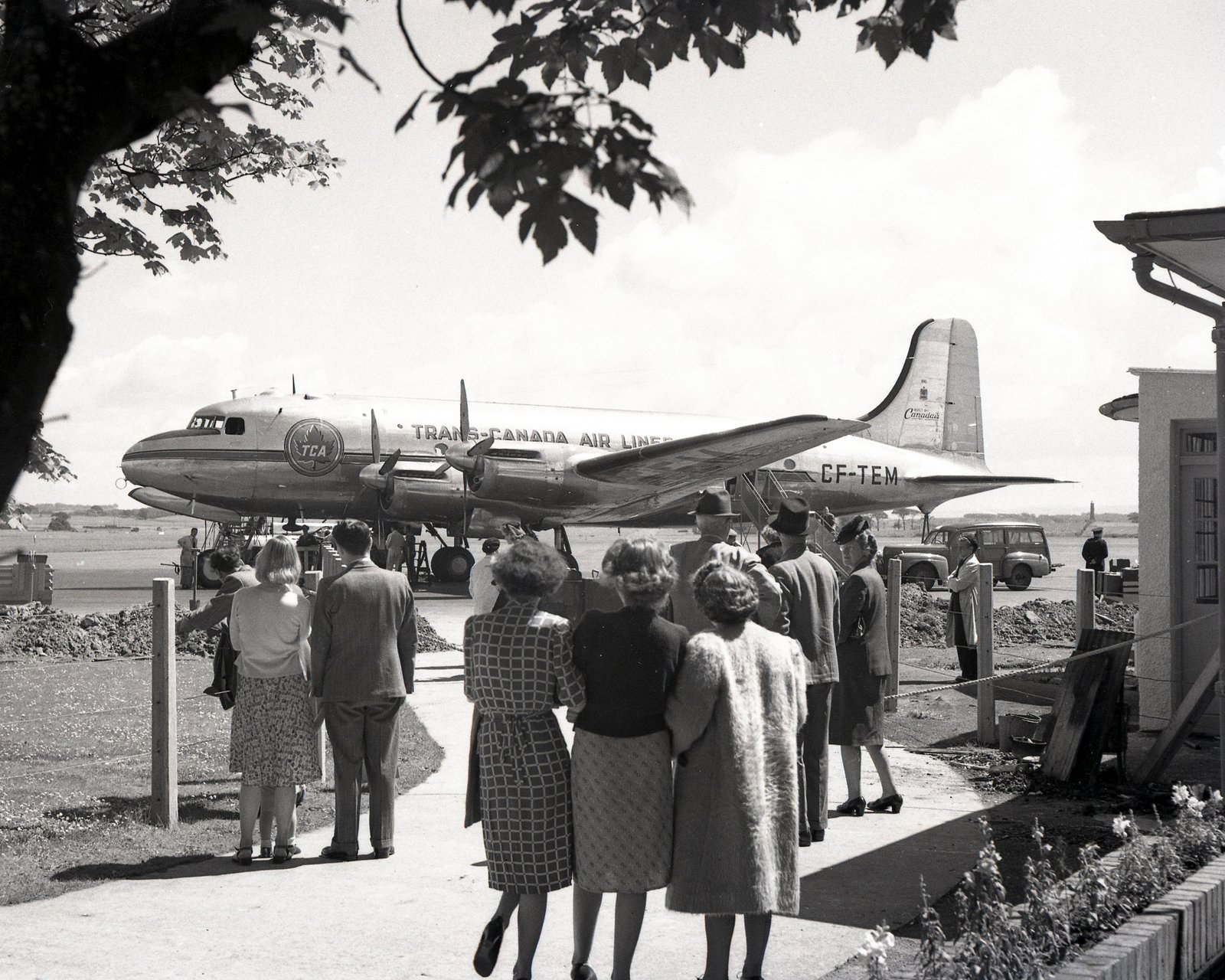 A Canadair North Star, a development of the Douglas DC-4, and passengers at Prestwick, c.1950s. © Gordon Macadie 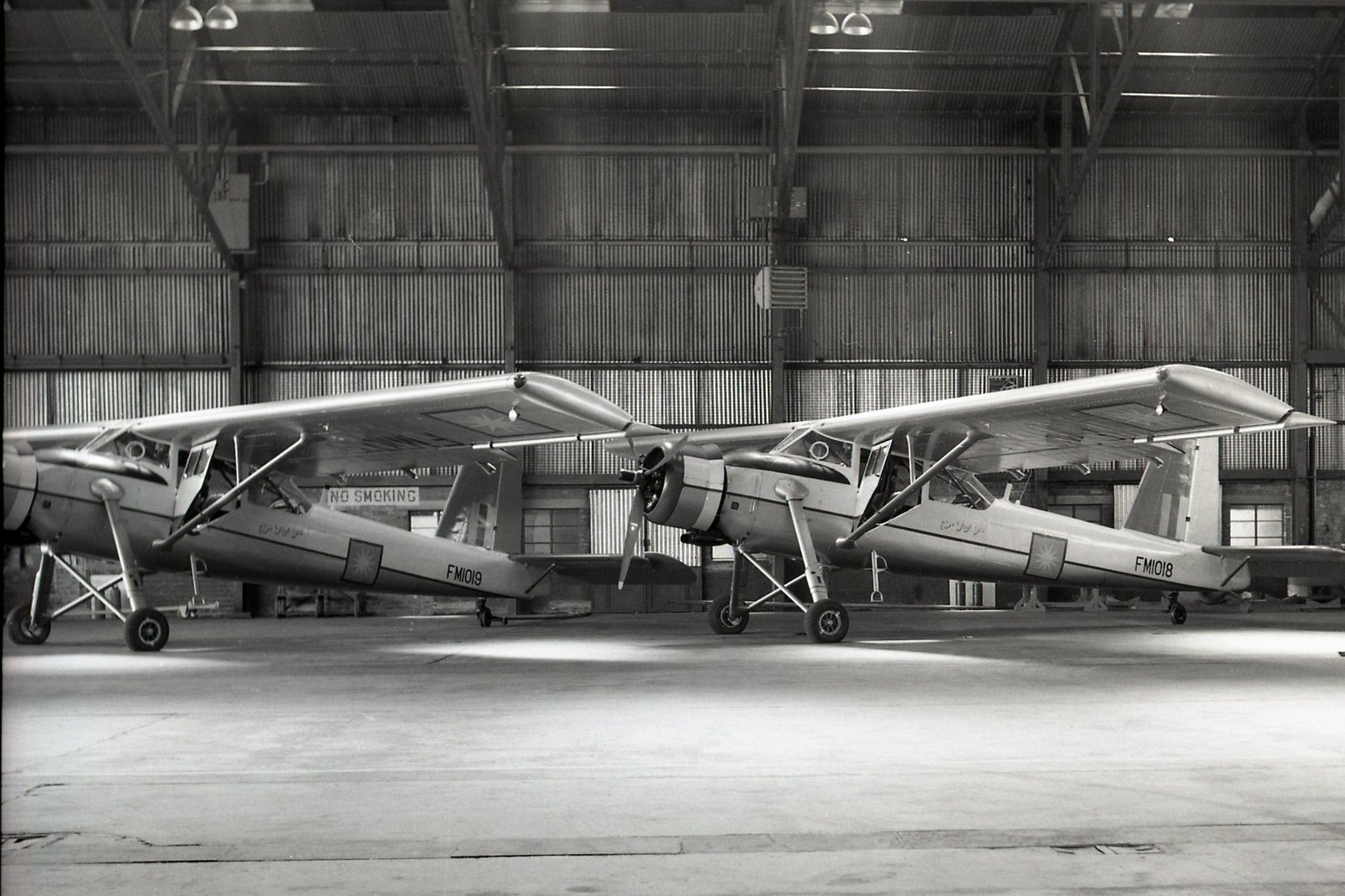 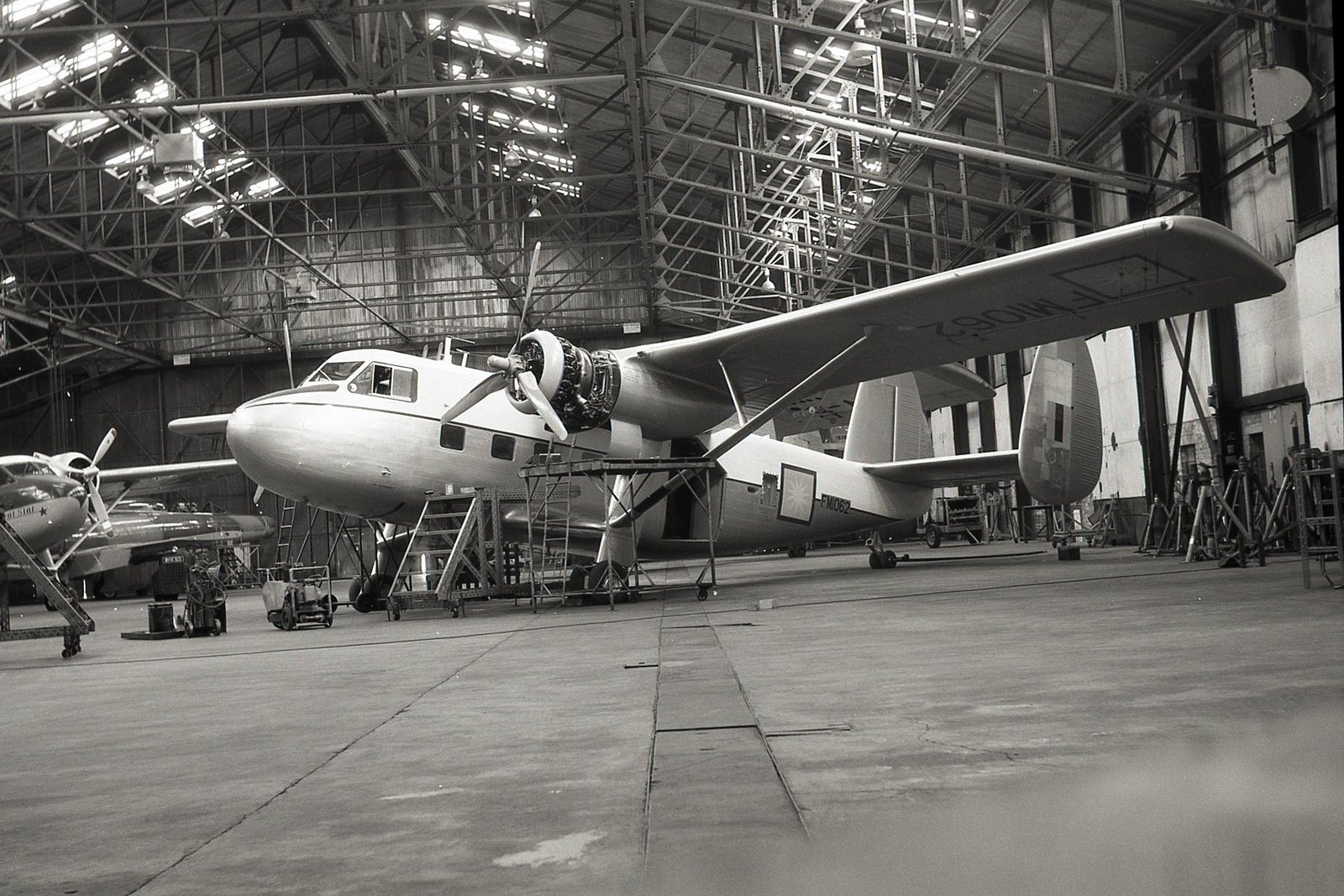 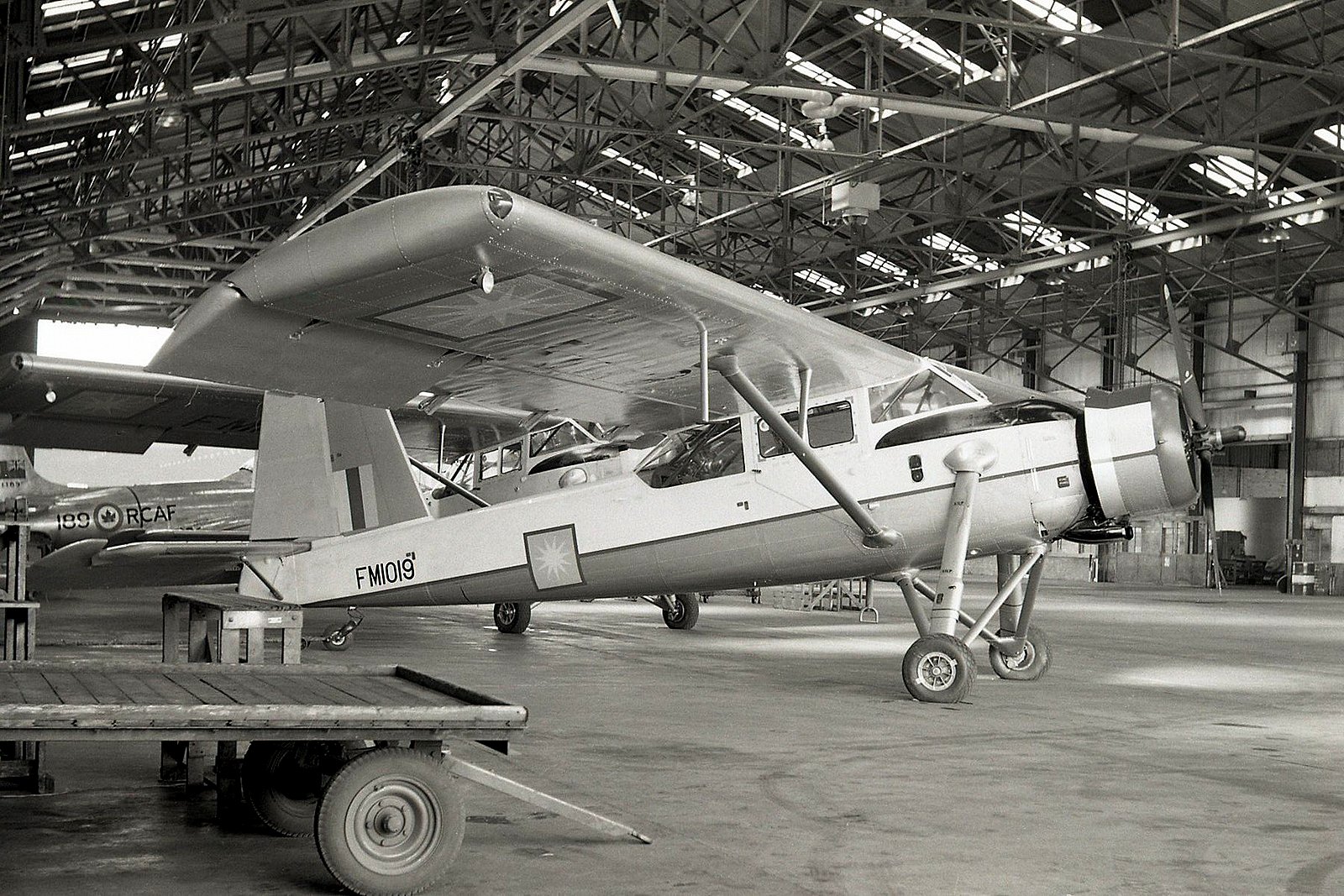 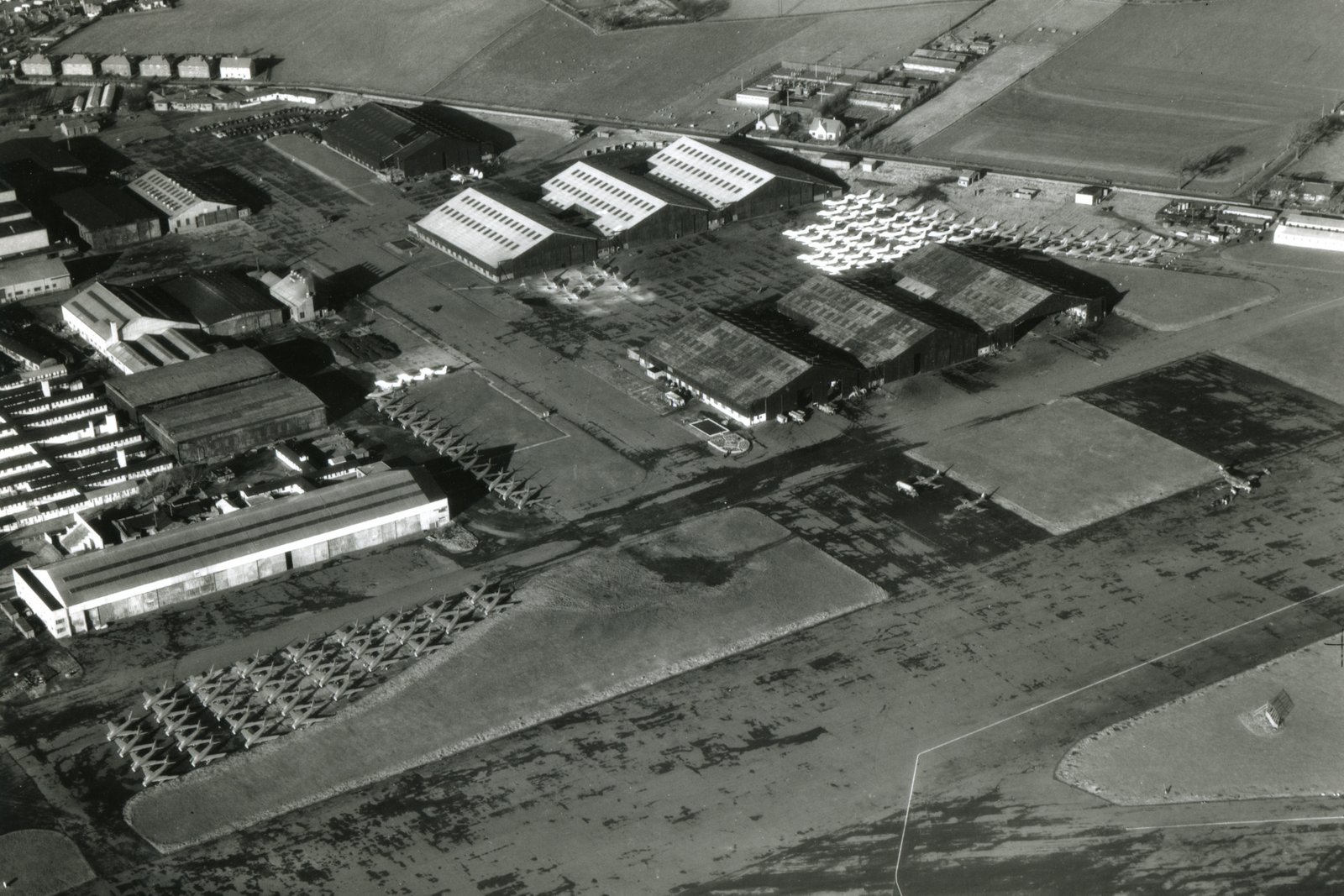 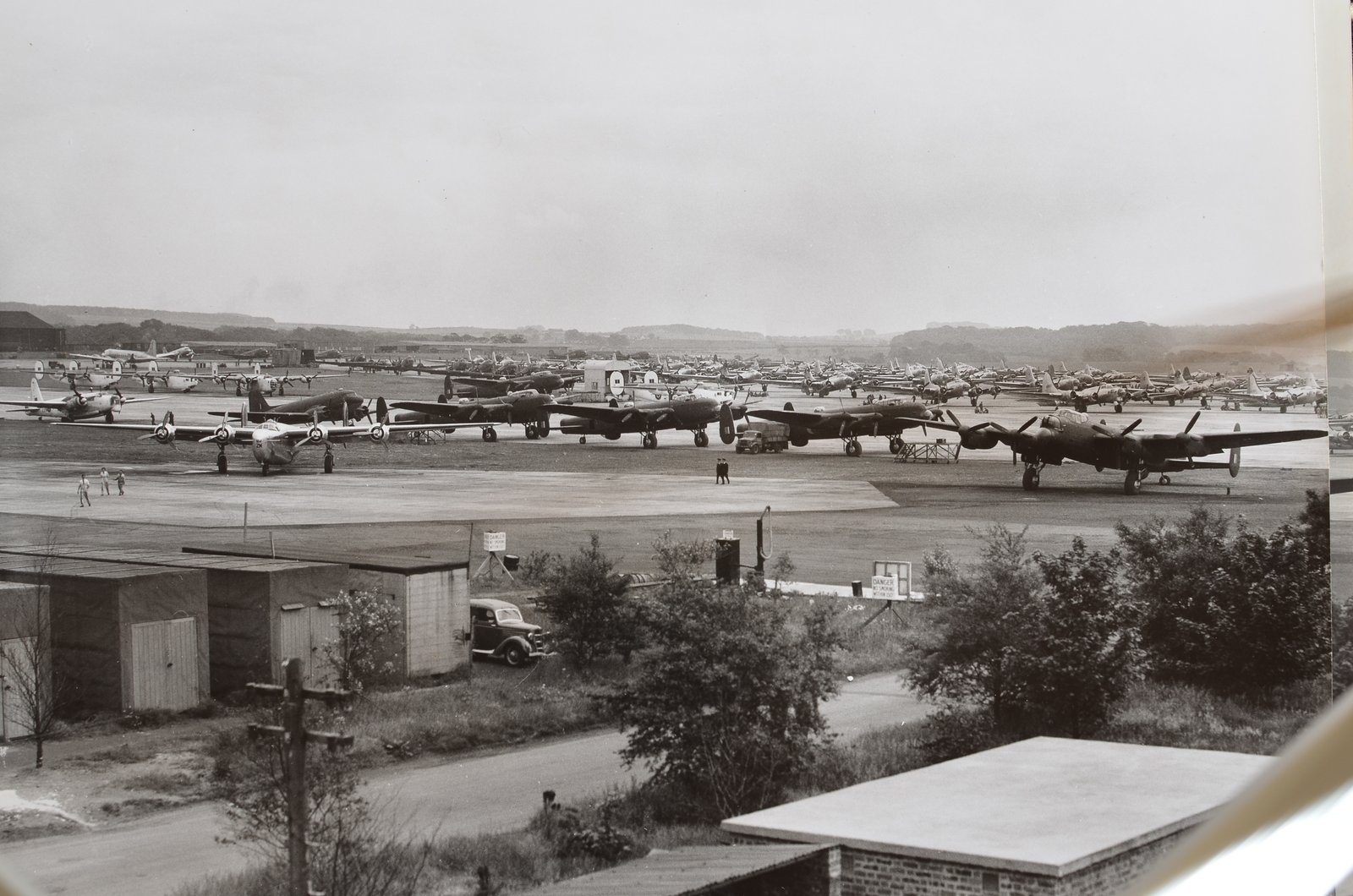 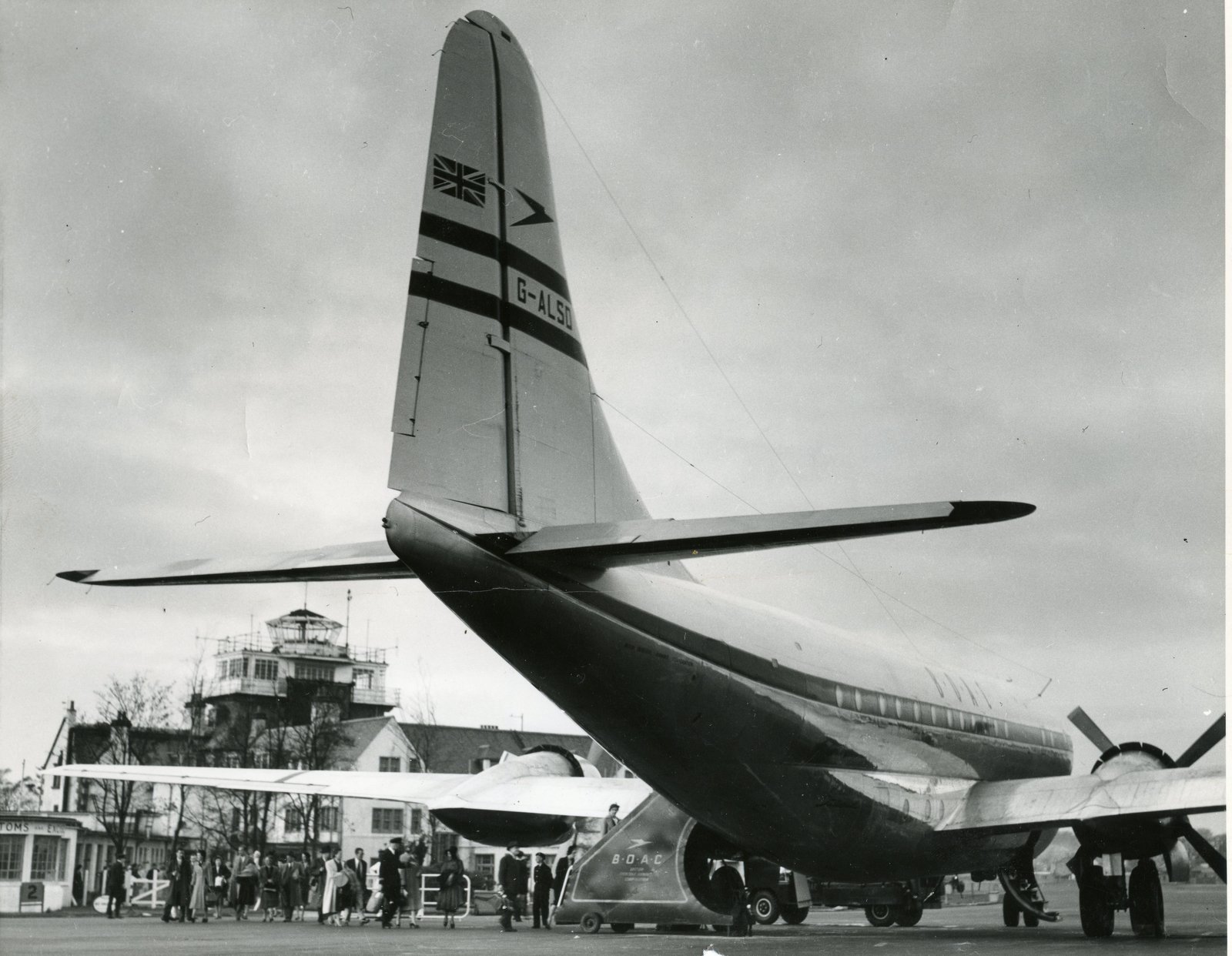 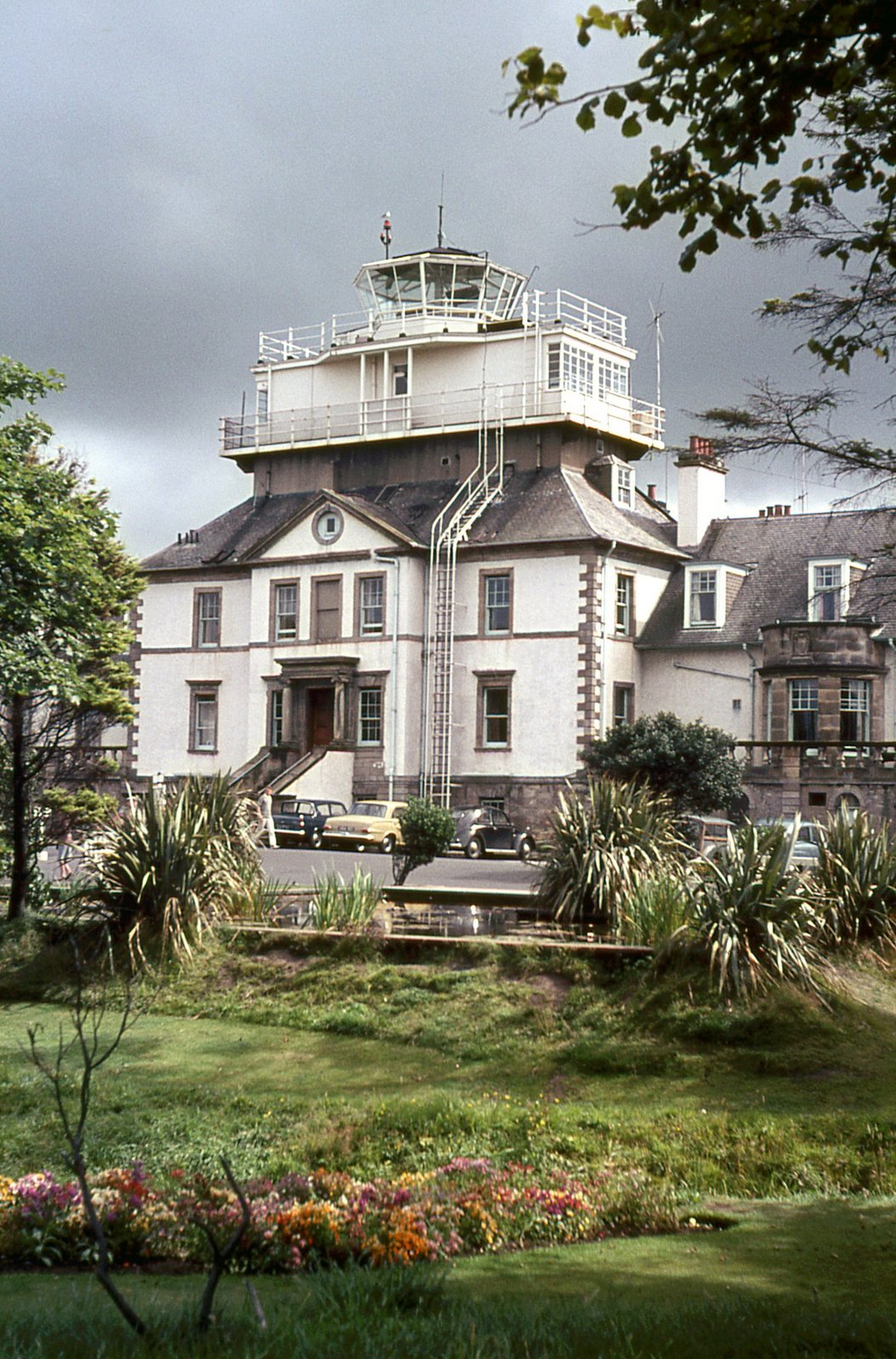 Orangefield house at Prestwick. The main terminal for the building in the post war area with hotel, restaurant and control tower added to the roof. Demolished 1966. Photograph c. 1950s. © Gordon Macadie. 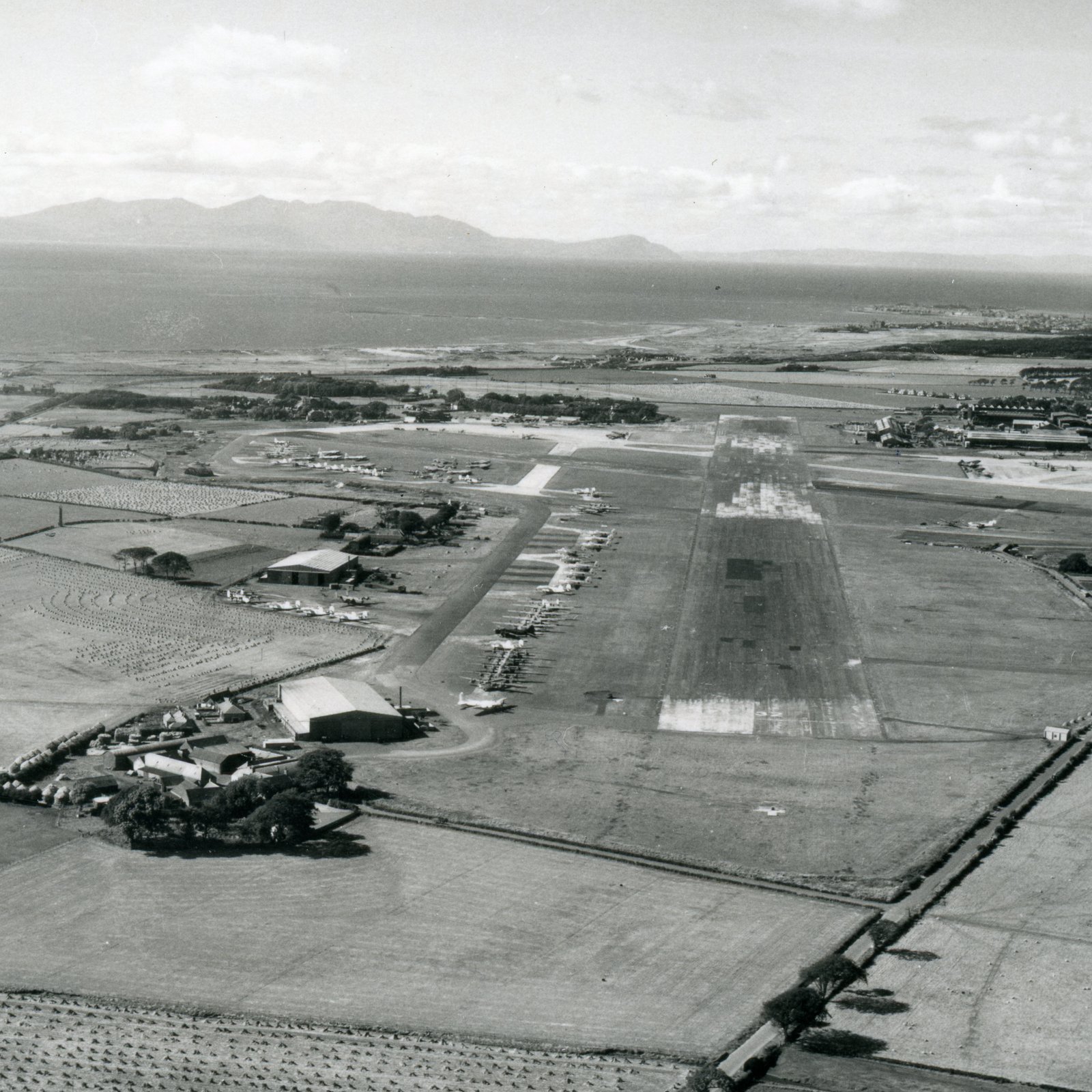 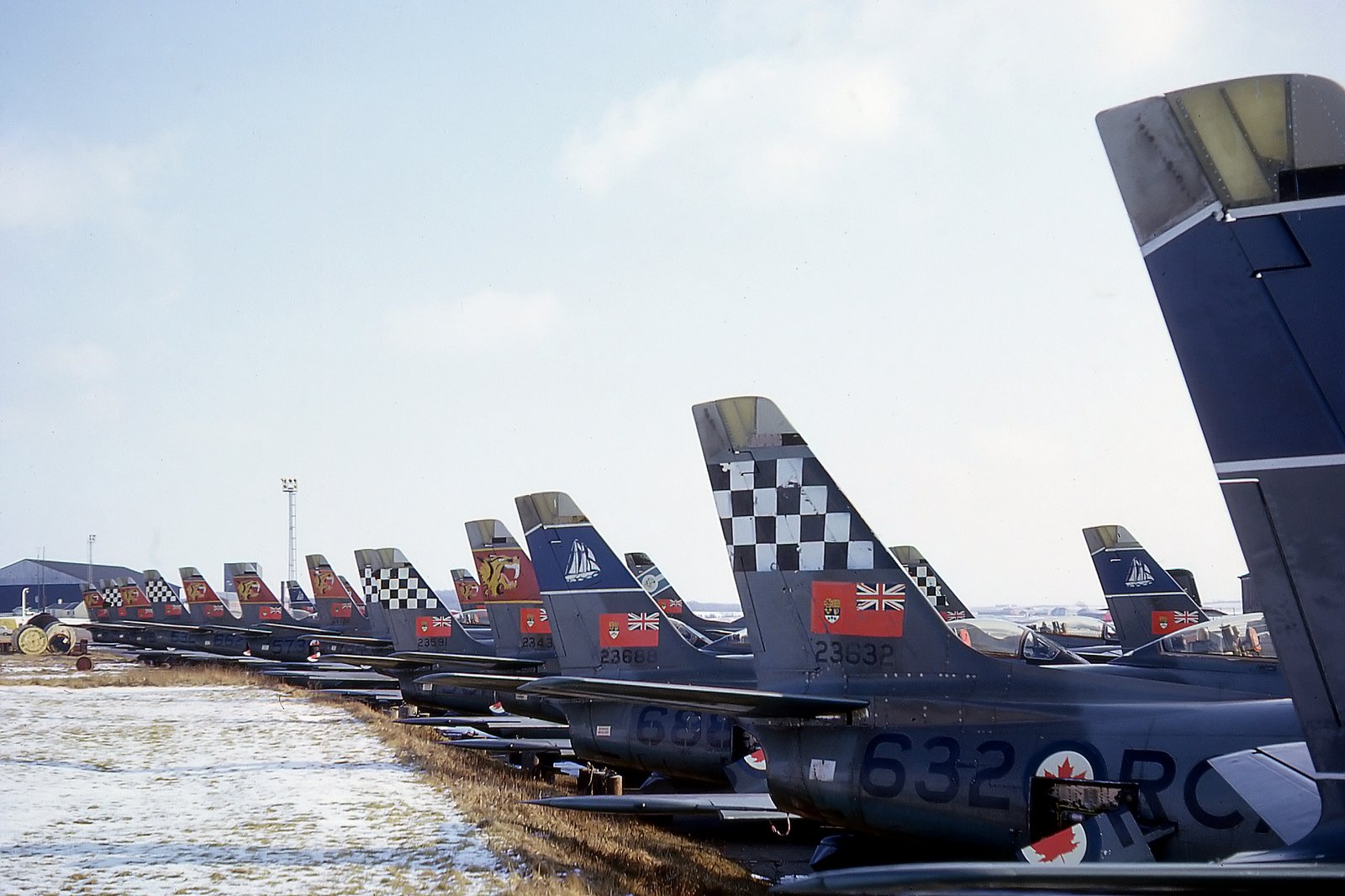 A Prestwick Pioneer at Prestwick, 1953. Courtesy of British Pathé

Footage from Prestwick, 1961. Courtesy of donaldwh

Footage from Prestwick, 1965. Courtesy of donaldwh